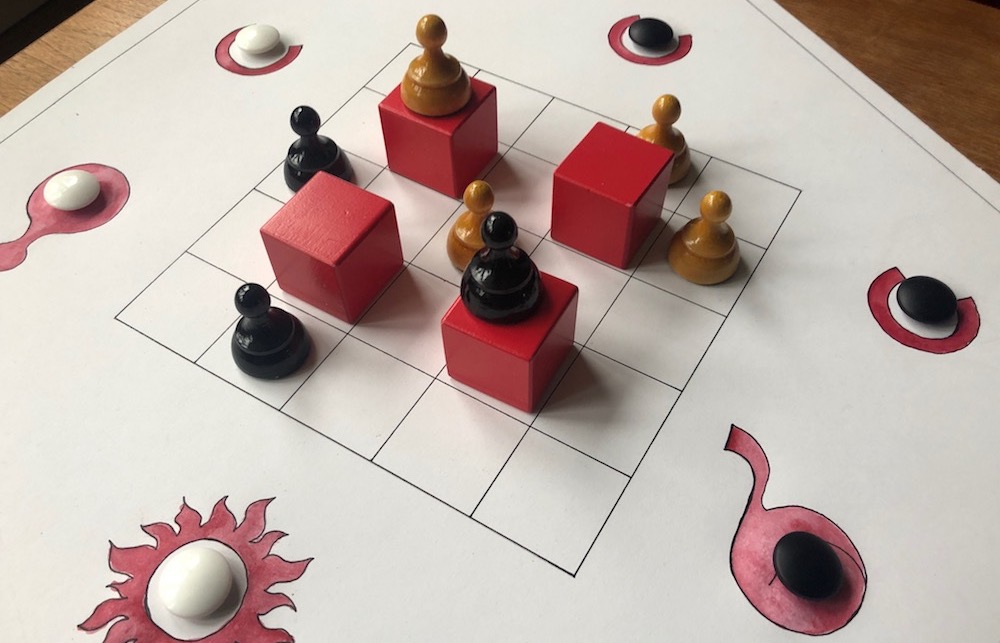 After studying ancient board games during the fall of 2016, I felt inspired to create this game. My primary design goal was to make it feel like something that had just been discovered in an old grave, with inscriptions on the wall for how to play it. I also wanted the act of playing it feel somewhat ritualistic.

The resulting game is one of shape shifting (“hamnskifte” in Swedish) and unpredictable turn order, controlled by the movement of orbs.

A future goal is to create version of this game out of clay, rock and wood (with carved holes for the orbs). Until then I will have to make do with a simple paper prototype. The good news is that it’s very easy to create such a prototype if you want to try the game yourself!

Here are the complete rules for the game: 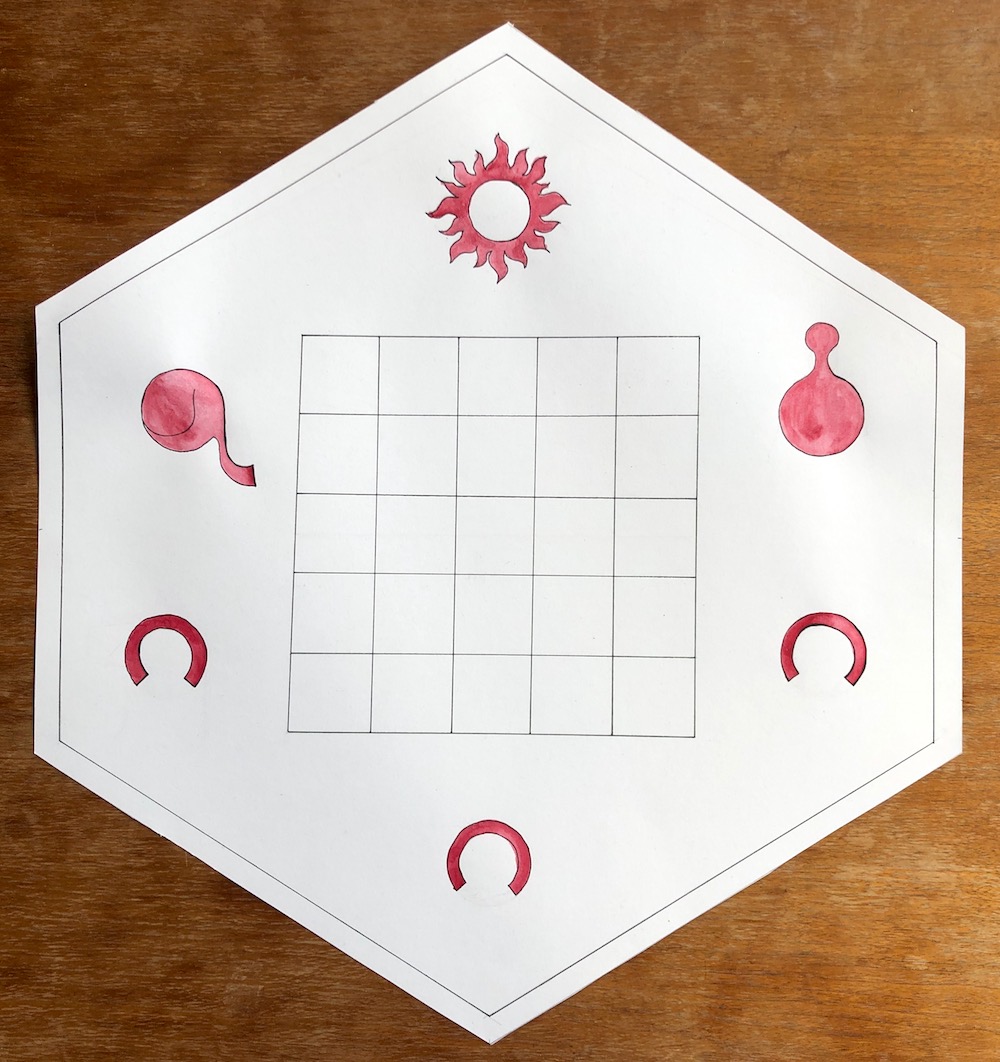 I created my board using an A3 paper, a ruler, a pencil, and some water color. The icons around the edge of the board are supposed to depict (starting from the top and moving clockwise) a sun, a pawn, three horse shoes, an elephant head. 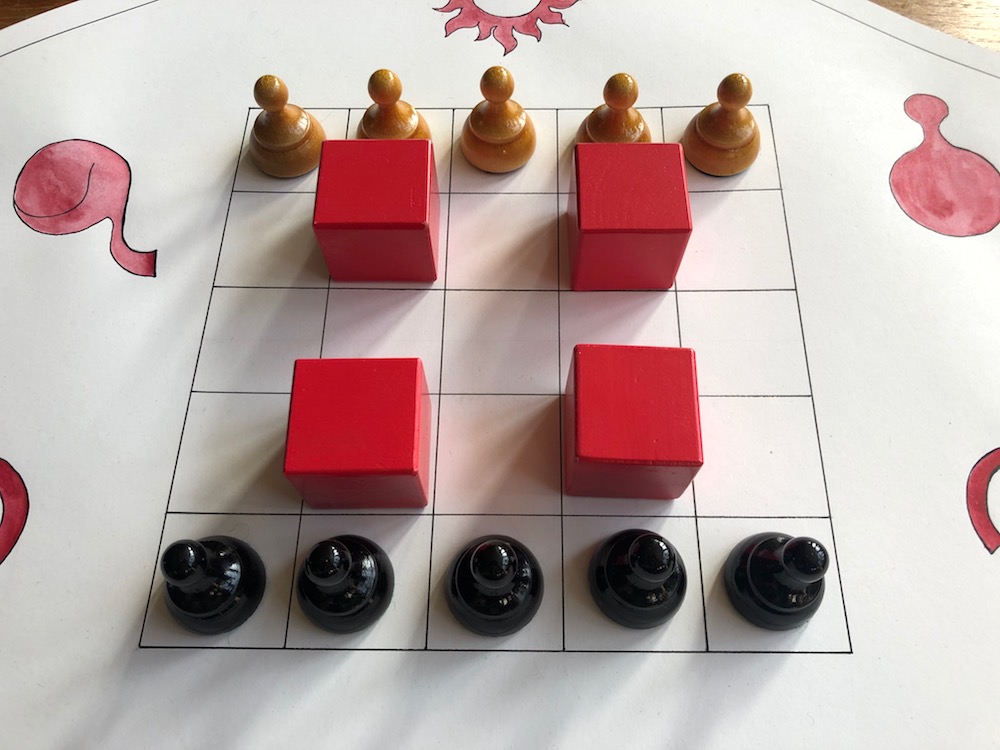 (If you don’t have wooden blocks for the pillars, just mark those squares with color.)

Here’s an example of how the game board could look just before the first move is made: 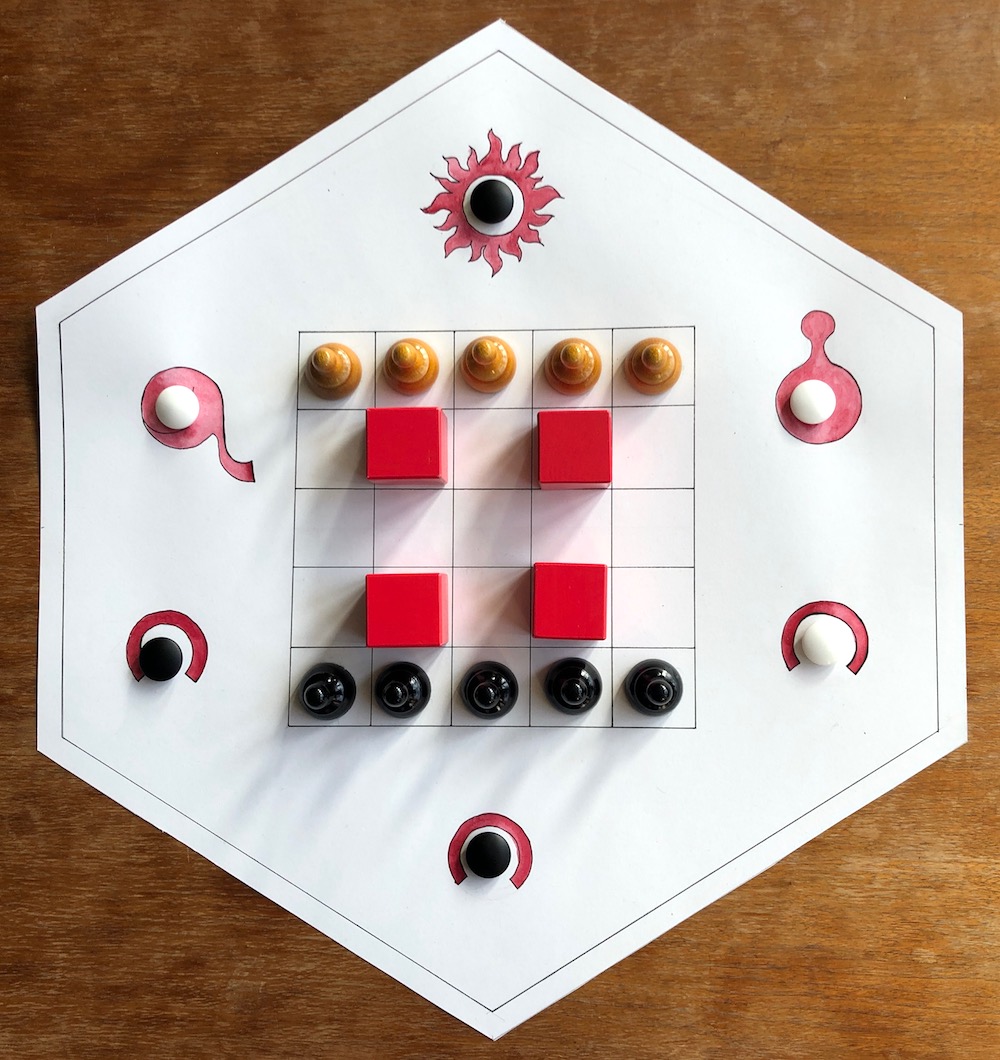 There isn’t a predefined turn order in Hamnár, instead you use the orbs and the icons to determine who gets to move.

Note that a player could potentially get to do a lot of moves in succession, depending on the placement of the orbs. She must be able to perform all of them (in order) or she will lose the game.

Here is a list of the various powers granted by the icons. No matter what kind of power is used, a piece can never move off the board or on top of a friendly piece.

Pawn — A pawn can move one step forward to the next square (up or down a pillar works too). If the target square is occuped by an opposing piece, that piece is removed from the board.

Horse — The horse is the most common icon on the board, taking up three of the six slots. A piece that is transformed into a horse moves like a knight in Chess; two steps in any direction and then one step to the side. Just like in chess it can jump over other pieces and capture an opposing piece where it lands. It can also jump up or down pillars.

Elephant — The elephant moves just like the tower in chess, except it can move through opposing pieces. This means that it doesn’t have to stop when it captures (stomps) an enemy, but can just keep moving (in the same direction though). Potentially it could capture four pieces in one move. The elephant can’t move up or down the pillars, so you better have a piece on the ground if your orb is on the elephant icon.

Sun — This is the only icon that doesn’t grant a movement power. Instead it allows the player to swap places of two orbs, if she so desires. This can be any two orbs, so the player can retain the sun power indefinitely (she’ll have to win the game using less moves though, so it’s a difficult strategy to adhere to).

When the sun icon has been activated, the game continues with the next icon (the pawn) activating, and so on.

Here’s how the game can look a few moves in: 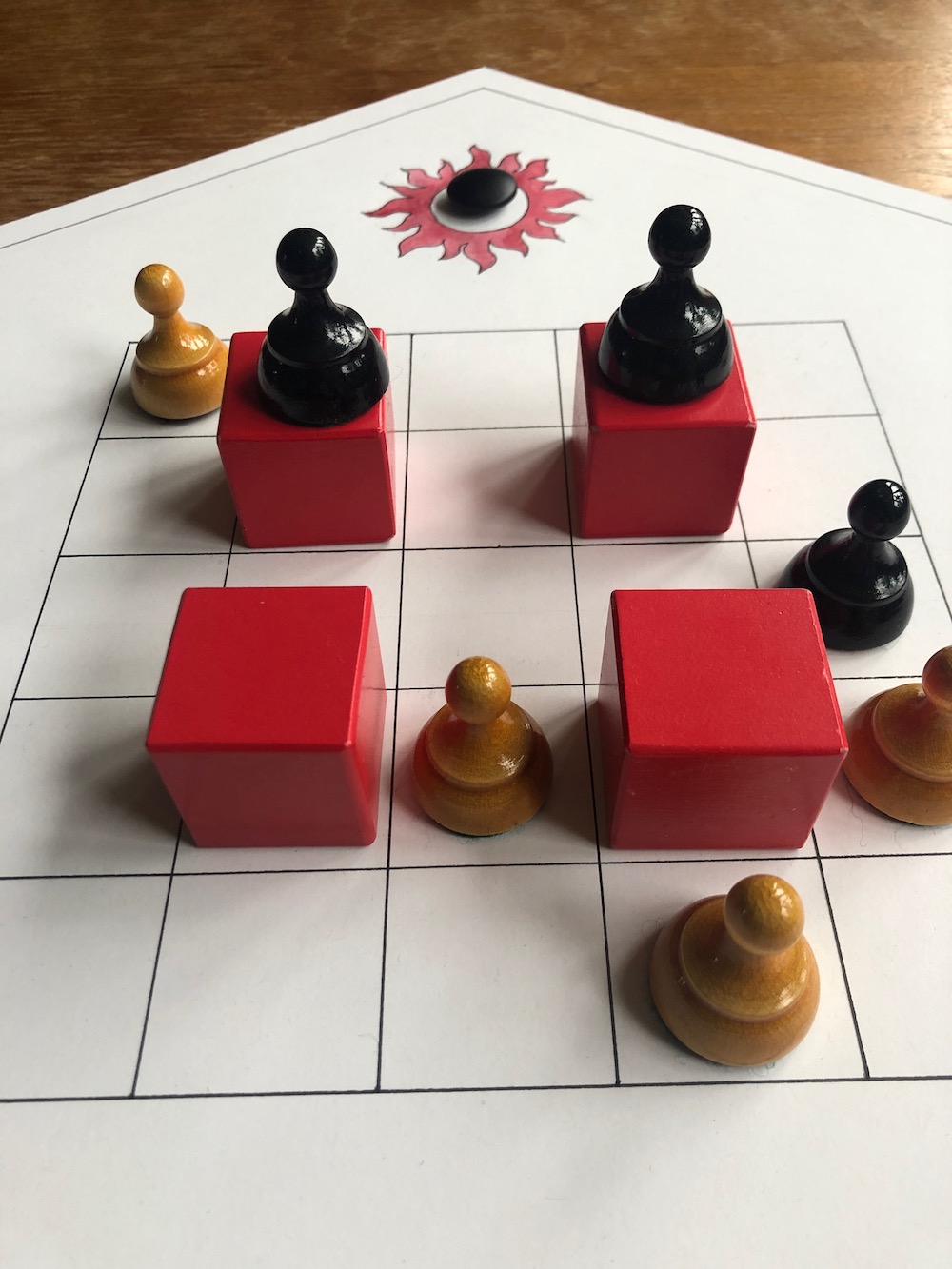 Looking back at the result I think that Hamnár has some interesting similarities with another game I’ve made — Clairvoyance. I guess that I must really like “3D levels” and “programming” in board games… I also think it bares some resemblance to a rather well known commercial board game called Onitama, though I haven’t played that one yet.

If you happen to try out Hamnár, please let me know what you thought about it!